Sant Sadhu Ram Ji was born in August 1944 and his parents, Mangla Ram and Chena Devi, lovingly named him Ladhu Ram. He grew up in a low-caste family, in a village in the former state of Bikaner, now located in Rajasthan near the Indo-Pakistan border. He did not have much formal education, and after completing up to the 9th grade in school, he started helping his father in farming. From his childhood he was strongly inclined towards spirituality and had a burning desire to realize God and to solve the mystery of life.His relatives wanted him to take an interest in the world and to accept responsibility for the family. His grandfather is reported to have given him 25 acres of his land in Punjab. However, young Ladhu Ram politely refused this gift of land, and, setting out on his own, took up work as a hired laborer on other people’s farms.
Read More

Although this life was very difficult, he found it conducive to spiritual pursuits. As a farm laborer he received a meager wage in exchange for his hard physical work, but his mind was free for the remembrance of God. He would always do an excellent job, charging less than the other workers. If a job was worth Rs. 100 he would charge Rs. 80; if it was worth Rs. 50 he would charge Rs. 40. He had also acquired an extensive knowledge of medicine – traditional and modern – and he treated those in his area who could not afford to pay for medical care, free of charge. He could have set up a prosperous practice, but he did not feel right charging large fees for prescribing a small amount of medicine, or recommending a treatment, or giving an injection. Speaking of this early time he has said, “Poverty may seem difficult to live with, but it has many advantages for a spiritual aspirant. I have seen both poverty and riches. I saw affluence in life first, and later much poverty. I can tell you from my own experience that a poor person has more contentment than a rich one. He can be more humble and meek, his heart is generally cleaner, his ego is less, he is more inclined towards God, and, his world being smaller, his involvement in the world and worldliness is also less. In short, if a poor person is fortunate enough to get the refuge of a Perfect Master, he can progress in the spiritual field more easily and more quickly than a rich person.” Since Ladhu Ram was from the harijan, or untouchable caste, it was not unusual for him to receive rough treatment. When he would stay on the farms of the people he worked for, he was often not allowed to eat with the higher caste people. Those serving him the food would sometimes not even place the chapatis on his plate, but would toss them to him to avoid being polluted by contact with an untouchable. If the landowners chose to give him food he was happy, and if they didn’t feed him he was also content in the will of God. From his wages he would support his family and take care of his own few needs.

Around 1972, Ladhu Ram came across a fakir who initiated him into Sant Mat and revealed to him the mystery of the first two words. The fakir instructed Ladhu Ram to continue to earn his own livelihood, to cook his own food while absorbed in the sweet remembrance of God, and to be grateful to Him with every morsel he put into his mouth. The fakir also told him to remain aloof from the world and to devote all his precious free time to meditation. This was Ladhu Ram’s only meeting with his first Guru, who departed after initiating him, and he says regretfully that perhaps there was some lacking in his own fate that he couldn’t meet him a second time. Ladhu Ram followed his Guru’s instructions wholeheartedly, working all day in the fields and then devoting 10-12 hours at night in meditation. He continued in this way for around fifteen years and made phenomenal progress on the spiritual Path, acquiring inner ascent, experience, and proficiency up through the second spiritual stage, crossing Trikuti and reaching Brahm Desh. However, he was aware that there were regions beyond, and he kept looking for someone who could guide him further. One of the landowners he worked for was going to a Guru and in 1987 Ladhu Ram asked him who he followed. And he enquire if a poor, low-caste person such as himself would be allowed to go to Him. The landowner replied that he was a follower of a Perfect Saint named Sant Ajaib Singh Ji, of Village 16 PS, Rajasthan, who was competent and commissioned to take the souls across the ocean of life. He told Ladhu Ram that at Ajaib Singh’s ashram no one looked to high or low caste and that all were welcome to sit at His feet. In October 1987 Ladhu Ram took initiation from Ajaib Singh. At that initiation he sat at the very back of the assembly, but when Sant Ajaib Singh heard the experience he had during the initiation sitting, He called him up to the front and made him sit right at His feet. Sant Ji said, “Normally in this world, those whose clothes are inferior are not given any attention or place. But I have brought this dear one ahead of everyone, despite his simple clothes, because he has had a very high and wonderful experience which has pleased me immensely.” Sant Ji embraced him and told him he would have to fight the mind with much courage and fortitude. He patted him on the back and said that Satguru would always be behind him and would want him to succeed and become His very own self. After his initiation, he obeyed Sant Ji’s instructions implicitly, living the life as enjoined by his Master and spending long hours in meditation. When Ladhu Ram would attend the Satsangs in his area, he would come and sit quietly, listen to the Satsang, and then slip away as soon as the Satsang ended. Sant Ji told him, “Ladhu Ram, become a hard-core brave warrior, determined to decimate the Mind – our deadliest foe. Never fear for anything for I am always and ever with you in this battle, and want you to succeed, sooner rather than later, because that will make me happy and relieved, and will enable the most sacred work entrusted to me by my Satguru – the responsibility of giving out the Truth to those sincere and seeking souls who are keenly in search of the God – to continue without interruption.” Around this time Sant Ji also changed his name from Ladhu Ram to Sadhu Ram. His family did not understand his devotion to Sant Mat and encouraged him to sleep at night instead of staying awake to do the practices. He stayed in a separate room, and when all the family had fallen asleep at night, then he would sit for meditation. In the morning, he would leave off before his wife brought him tea. One morning, not long after he was initiated, she brought the tea early and found he had vacated the body and was completely absorbed within. Thinking he was dead, she started weeping loudly. Hearing her, their children also came running and started crying, “Our papa is dead. Our papa is dead.” They called a doctor, who lived about 15 km. away. When he arrived and examined Ladhu Ram’s lifeless body, he thought perhaps he was in the throes of pneumonia or some other serious illness and gave him an injection. About an hour later, when Sadhu Ram reentered his body, he was surprised to find all the commotion going on. Of the incident he says, “I never made that mistake again. After that I told my wife to bring the tea only when I called for it.” He made rapid progress on the Path.

Six months after his initiation, in March 1988, he went to 16 PS ashram to participate in a ten-day program of meditation and Satsang. At these retreats Sadhu Ram would spend all of his time in meditation. Before coming to the retreat, he told a friend who would be accompanying him that at the retreat his task was going to be accomplished, though he did not understand fully himself what that would mean. Much later he explained that, with the infinite grace of his Satguru, he completed the spiritual journey at that time up to the stage of self-realization, removing all the three sheaths from the soul – physical, subtle and causal – and reaching the third stage where the soul is revealed in its pristine glory, having the light of twelve suns. He asked his friend to arrange an interview for him with Sant Ji, and that dear one replied that, as Sant Ji was extremely busy during the retreat, it would not be possible. Then he told the dear one to simply send a note to Sant Ji with the request and leave the rest to Him. Sant Ji called Sadhu Ram and, upon hearing of his high experience, expressed happiness and told him that one important milestone on the inner journey had been crossed and that the next should also be covered with the same zeal, enthusiasm, and devotion. After he came back from meeting with Sant Ji, his friend asked him what Sant Ji had told him, and he replied that Sant Ji had said, “It is good that at least one has come out; one has swum across.” Sadhu Ram continued meditating 10-12 hours a night, moving on through the stages of the spiritual journey, until he became one with his Guru, and no difference was left between them. As Sadhu Ram has explained, “The dear one who is asked to carry on the spiritual work of a Saint after Him, is under preparation and perfection for many births. It is not as if after obtaining initiation, one meditates for ten years and becomes perfect. No dear ones, it does not happen like this. He is nearly perfect when he comes into this world, but still works hard, spends nights in weeping for the face of his Beloved, sleeps less, speaks less, and eats less, and is never involved in passions, possessions, pride, and prejudices. If it were not so, everyone would have become a Saint.” Before Sant Ajaib Singh left this physical plane, He bestowed all His spiritual powers on Sadhu Ram. 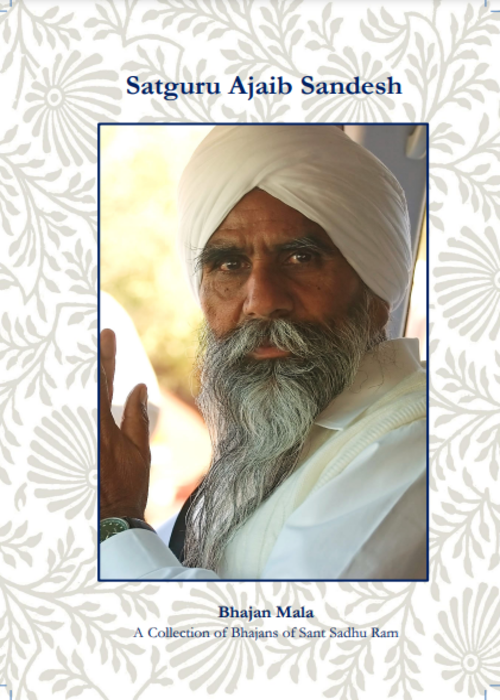 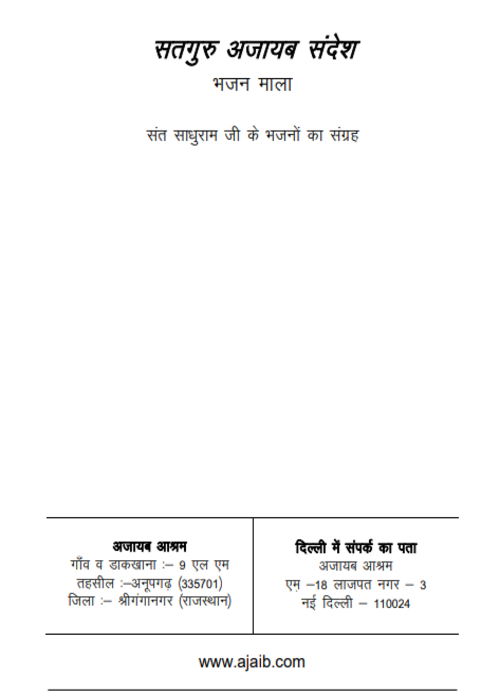 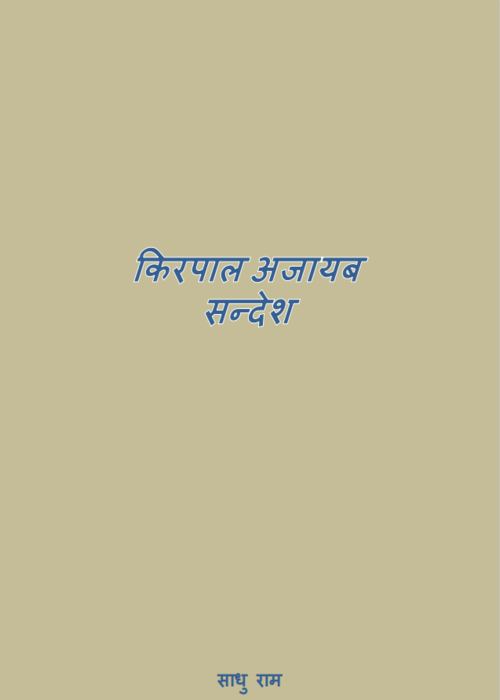 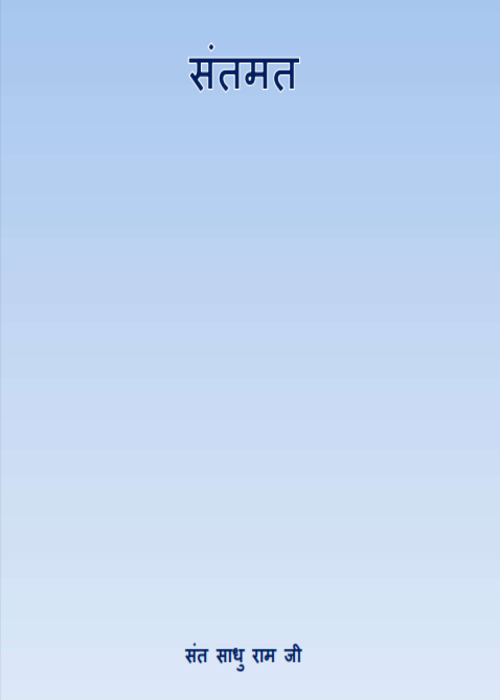 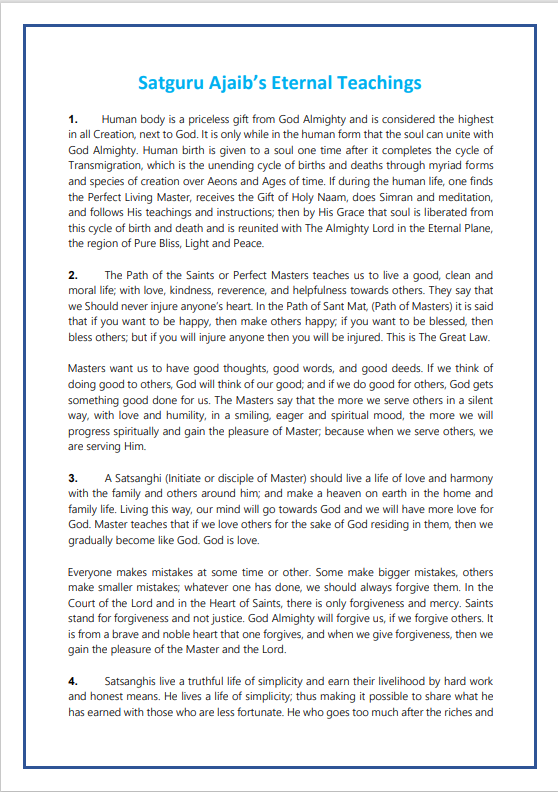 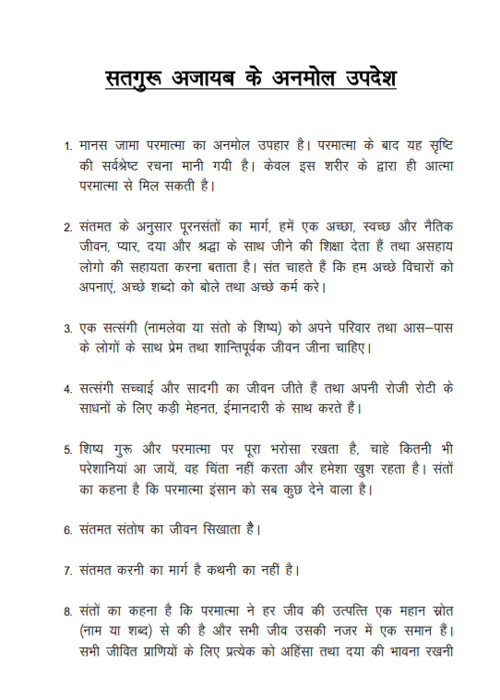 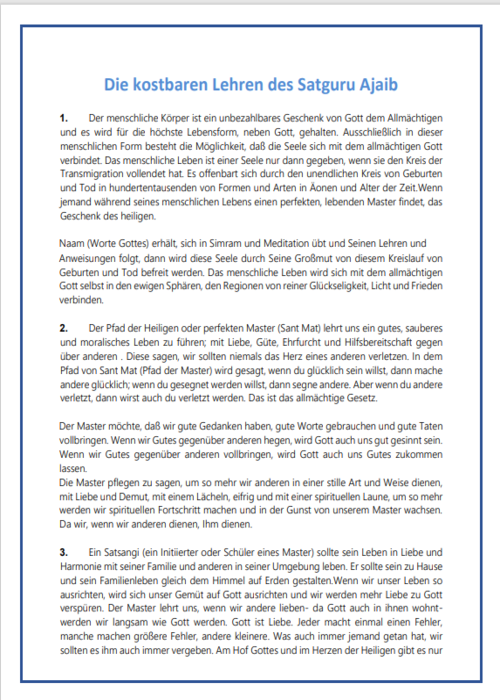 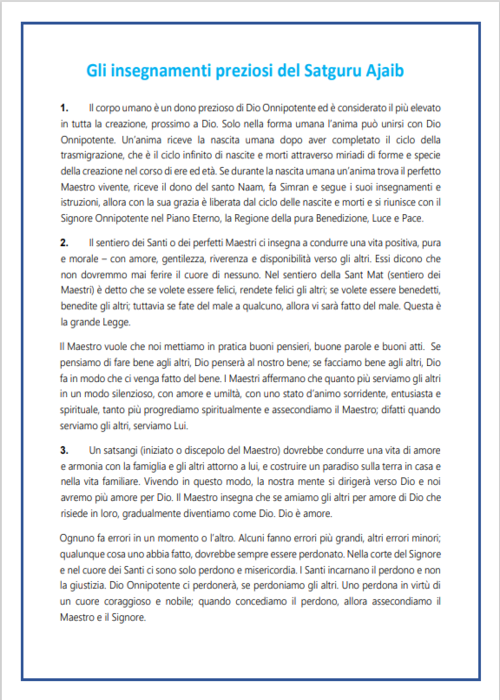 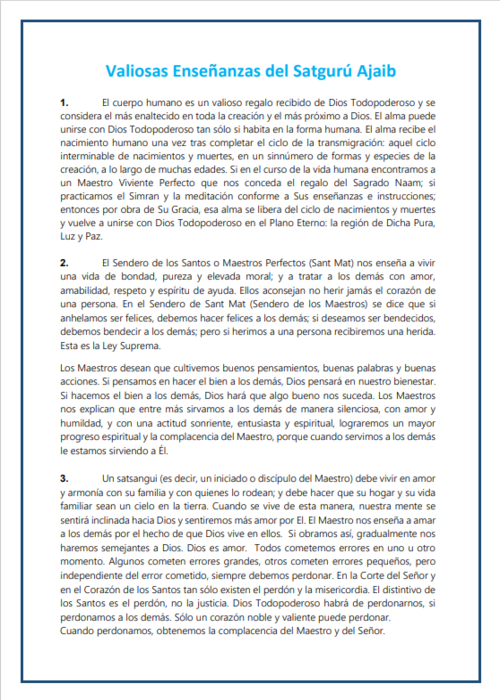 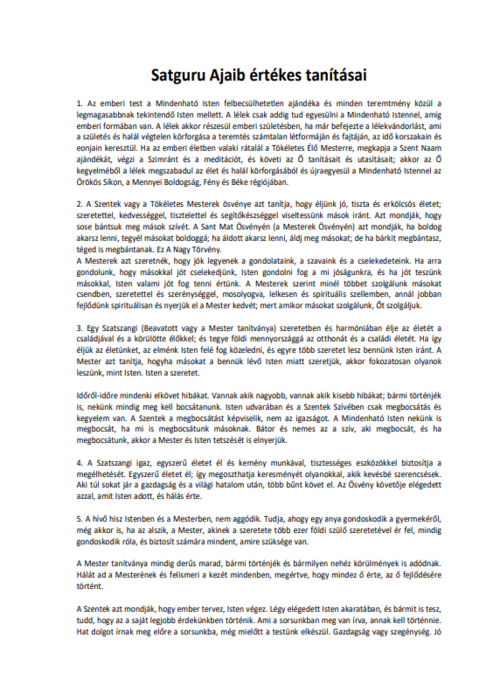